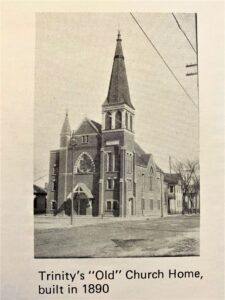 By December of 1879, worship services were being conducted in the Andreas Julesberg Hall (1317 Avon St.) and business meetings were held in the homes of members.  On February 6, 1883, a decision was made to buy lot No. 3, block No. 5 of the Northern Addition for the purpose of constructing a school and assembly building.  The new building was used for worship, mission and prayer meetings, and Sunday school.  It was rented to other Lutheran groups at the rate of .25 per meeting.  Janitorial duties were assumed by members of the congregation for three months at a time without compensation.

On February 3, 1885, the church property was sold for $1,200.00 to K. Skaar, and the congregation was dissolved.  Nine days later, the congregation was reorganized under the name of Trinity Evangelical Lutheran Congregation, and a call was sent to Rev. L.H. Haakonsen of the Augustana Synod.  The church property was purchased back from the buyer and a custodian was hired at $25.00 per year.  REv. Haakonsen accepted to conduct 20 morning worship services, several evening services and to perform ministerial acts.  A theological student, Mr. Rue, was hired to conduct parochial school for three months during the year. Laying on of hands as part of the Absolution in the service of Holy Communion was adopted.  An organ was purchased for use in worship for $45.00, and Landstad’s Hymnbook was adopted in 1882, but Ludwig Lindeman’s new Choral Book for Organ Music and Hymns replaced it in 1887.

By Easter of 1887, the Norwegian Liturgy and the wearing of the priestly robe and collar by the minister was adopted.  Offerings from Mission Services once each month were sent to the Norwegian Mission in Madagascar.  The practice of selling Sunday school books to pupils at cost began in 1889.

Trinity Congregation joined with Our Savior’s Congregation at Coon Prairie and Bethania Congregation at Esofea to form a parish served by Pastor Haakonsen in 1888.  Then in 1890, Trinity joined the United Lutheran Church in America, the year of the organization of that Synod.  The church was remodeled and additions were made in 1891.  Following, in 1893, Trinity began supporting the United Evangelical Lutheran Church College at Northfield, Minnesota (St. Olaf College).

The Rev. Haakosnen resigned in April 1891, and was replaced by Rev. E.P. Harbo who conducted services every 4th Sunday morning and every other Sunday evening.  The church was dedicated by Rev. Harbo who served until 1893.  Candidate of Theology M.O. Hanson served for one year until Rev. R. Anderson became temporary pastor alogn with Rev. Hauge.  In 1896, Rev. John Granskow accepted a call and served through 1899; Rev. M.N. Knutson served until 1905, when Candidate of Theology Torgeir T. Hoverstad was recommended and called to serve Trinity, Looney Valley, and Houston.

The congregation progressed under the leadership of Pastor Hoverstad and Pastor L.S. Marvick who succeeded Hoverstad in 1909.  In 1913, Rev. Marvick resigned and was succeeded by Rev. Alfred Forness.  During the next few years, there was much talk and discussion concerning the merger of the United, Hauge, and Synoden Churches, which was finally completed in 1917.  It was decided that the Trinity property was to be sold and Rev. Forness offered to resign to clear the way for merger.  The congregation was to be dissolved and a new one to organized under the name of ‘Trinity.’  The altar railing, baptismal font, pulpit, pews, and bell were sold for $505.00 to Vang’s Congregation of Wallhalla, North Dakota.  The old church Bible was given to the oldest living member, Godfred Ruud and the building was sold for $1,200.00.  Thus, the end of the old ‘Trinity’ congregation on October 22, 1919 was recorded.

The two congregations merged with a minimum of difficulty.  With Pastor Vik leading the congregations, good will prevailed on both sides and adjustments were readily made.  In 1919, it was voted to buy a new pipe organ which was purchased for $3,100.00.  The congregation progressed satisfactorily and each annual meeting saw the addition of new families to the membership; and in 1922, a Board of Deacons was formed.  In 1926, it was voted that the Trustees should organize as a body with Chairman and Secretary, to carry on their work in a business-like way.  The Young People’s Society, having been organized in 1879, now re-organized as Luther League in 1927.

On July 10, 1927, the 40th Anniversary Jubilee of Pastor and Mrs. E.O. Vik was celebrated at the Onalaska Agricultural grounds.  The honored couple were presented with a new car in gratitude for their years of faithful service.  This record of service was lengthened so that it was possible to have a Golden Anniversary celebration for the Viks on July 24-25, 1937.  This was one of the great events in the history of the congregation.  The Golden Wedding Anniversary of the Viks was also observed.  Mrs. Vik was loved and respected by everyone and no history of Trinity would be complete without a tribute to her as well as to her husband.

During the depression years, things were often difficult for the congregation, but the crisis’ were always met.  On February 21, 1931, the Mission Society was organized with their main purpose to help the needy at home, being one of their many projects during the depression.  Pastor Vik failed in health, but continued to work until nearly the end.  He preached his last sermon on Christmas of 1938, and was called to his reward on January 15, 1939.  Mr. Sigurd Urberg, Seminary Intern, carried on the work until the arrival of the new pastor.